The Compressor effect pedal allows for reduction of the dynamic range of the inputed audio signal by narrowing the difference between the high and low levels of volume (amplitude). Compression can be used to make your music sound louder without increasing its peak amplitude. It can be used to make quieter sounds louder while leaving louder sounds unchanged. 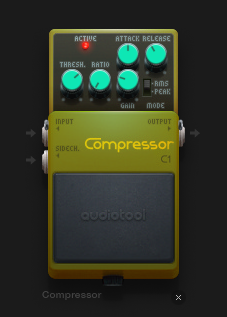