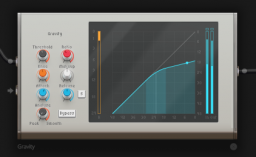 Gravity is a single-band compressor with visual feedback according to its settings.