Heisenberg is a PM synthesiser which provides an enormous variety of sounds. Heisenberg offers a real choice regarding how sounds are created, users can work with Heisenberg as a subtractive synthesiser but it can also be configured to work as a phase-modulation synthesiser. There are 4 oscillators or operators which can each be configured to produce 1 of 49 different waveforms. After the operators comes the modulation matrix where it is possible to decide (if you want) what modulates what and what goes where. There are 3 exponential envelopes, 2 LFOs and a pitch envelope, all of which being tempo-sync enabled.

To finalise the sound or to just to add something extra there is a voice controlled filter-unit with adjustable low/hipass behaviour, resonance control and ordering options. The filter's cut-off frequency can also be modulated by all envelopes (apart from the pitch envelope) and LFOs. Heisenberg also supports Unisono which means up to 4 different voices can be triggered by one note, with detuning and stereo separation for each voice.

The operators or oscillators are where the raw sound of the synth is set. There are 4 operators A, B, C and D, each of these operators can be set to play 1 of 49 different waveforms. What makes the Heisenberg special is that each wavetable based operator can be phase-modulated by each of the other operators, as well as this each operator can also be used to modulate itself. The modulation matrix also includes an amplitude modulation section where it is possible to use the envelopes and LFOs to modulate the amplitude of each operator and/or the filter's cut-off frequency. Deciding what modulates what is done by plotting percentages in the modulation matrix, this is done by holding down the mouse and dragging up or down to add a value to the grid. 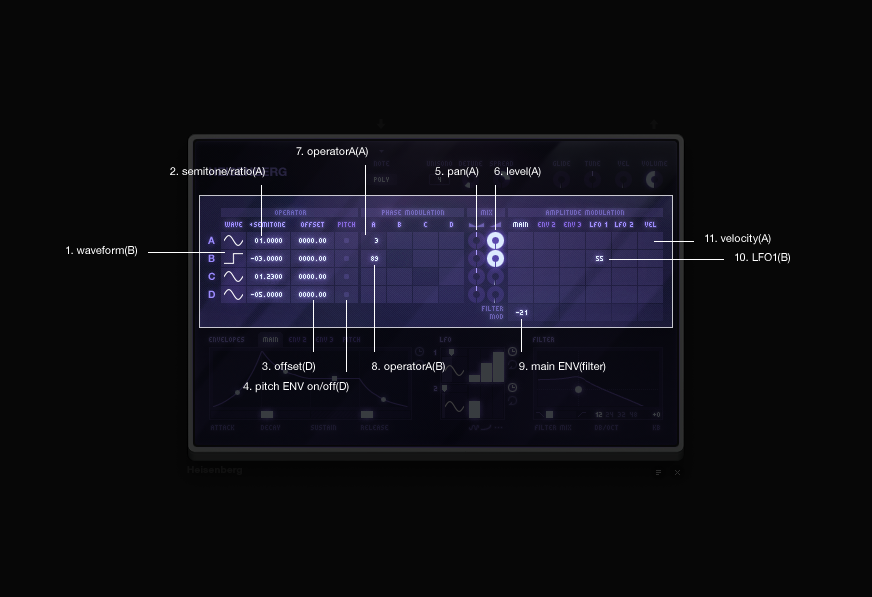 The Heisenberg includes 4 envelopes, Main, ENV2, ENV3 and a pitch envelope. The mixed signal of the operators will always be going through the main envelope. ENV2 and 3 will only affect an operator's signal if this is first specified via the amplitude modulation matrix. Each envelope can be used to dynamically modulate different targets at the same time, such as the level of each oscillator and/or the filter's cut-off frequency. All envelopes can be also be tempo-synced and allow for the decay phase to be looped, as well as this the exponential slope (ADSR) of each state can also be modified. 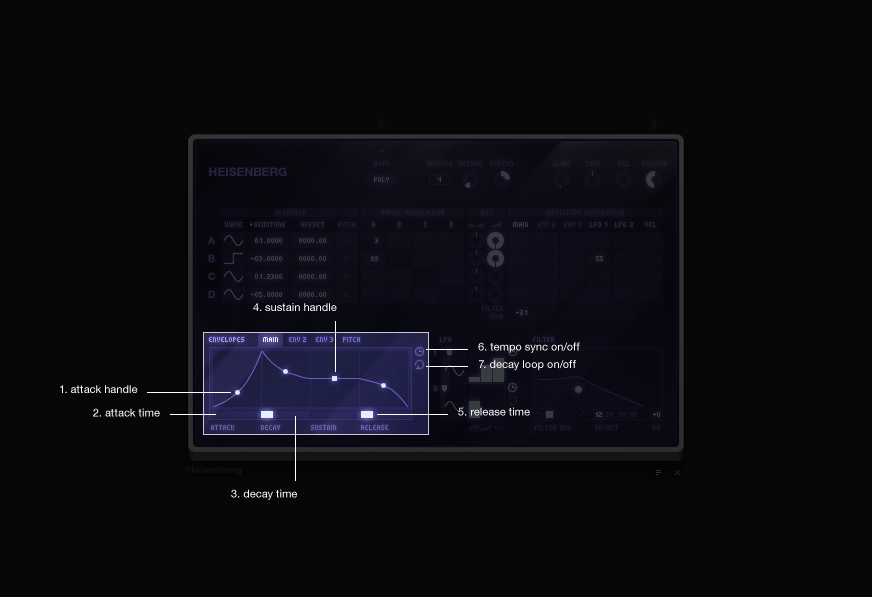 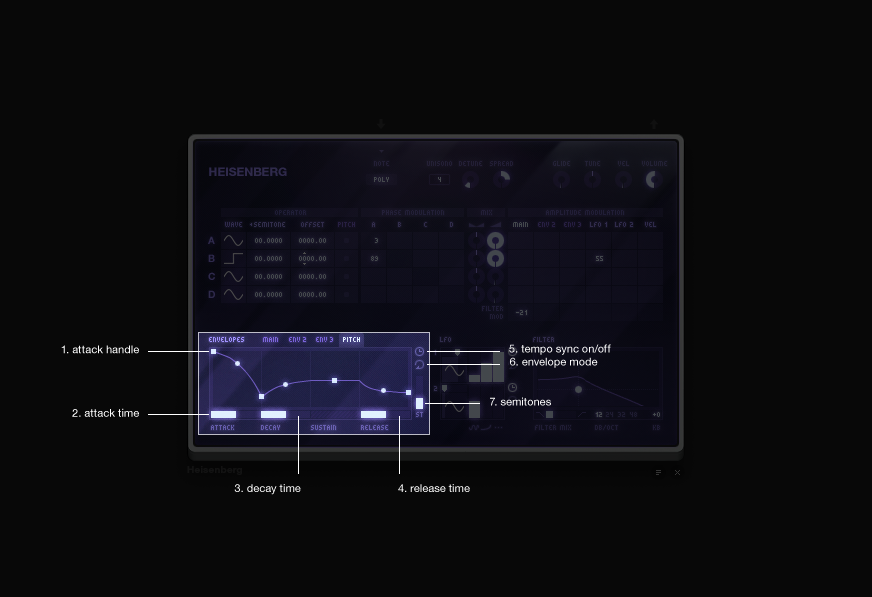 The 2 LFOs include the same wave table as the oscillators with 49 different waveforms to choose from. The rate of each LFO can set to a very slow oscillation of 0.01Hz (1 cycle every 100 seconds) up to 500Hz (audible range). Each LFO can be time-synced from 4 bars down to 1/256. The output from the LFOs can be delayed and can also be faded up to the maximum level (these timing can also be tempo-synced). Each LFO can be delayed and allows for the phase to be offset. The LFOs are activated by using the amplitude modulation matrix to plot what you want the LFO's to modulate.

Below: The below image only references LFO1 since both LFO1 and LFO2 work in exactly the same way. 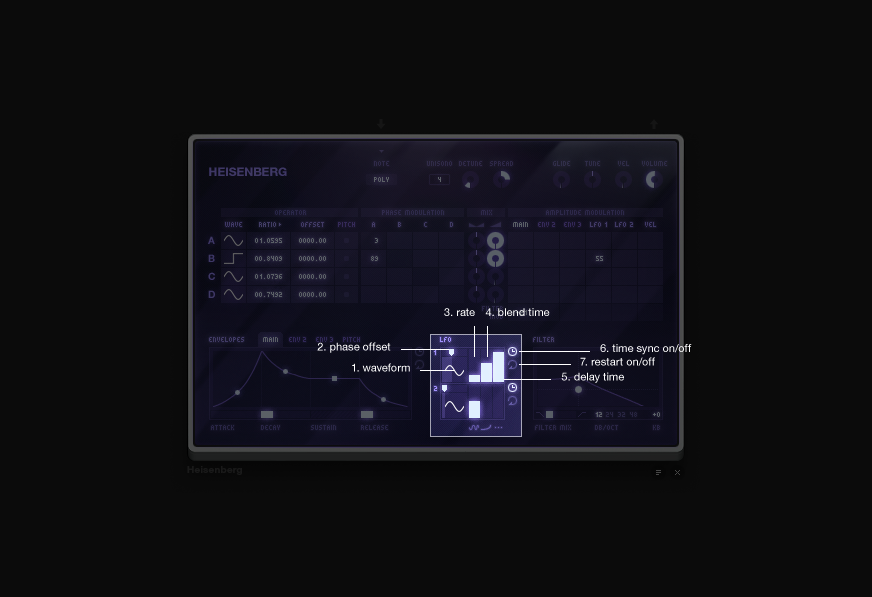 The voice controlled filter is applied to each voice being outputted by Heisenberg. Heisenberg's filter makes it possible to smoothly glide between the 2 filter modes (hipass/lowpass). The filter also includes a keyboard tracking option which includes positive and negative values. The filter allows the user to choose between 12, 24, 36 and 48 decibels for each octave. 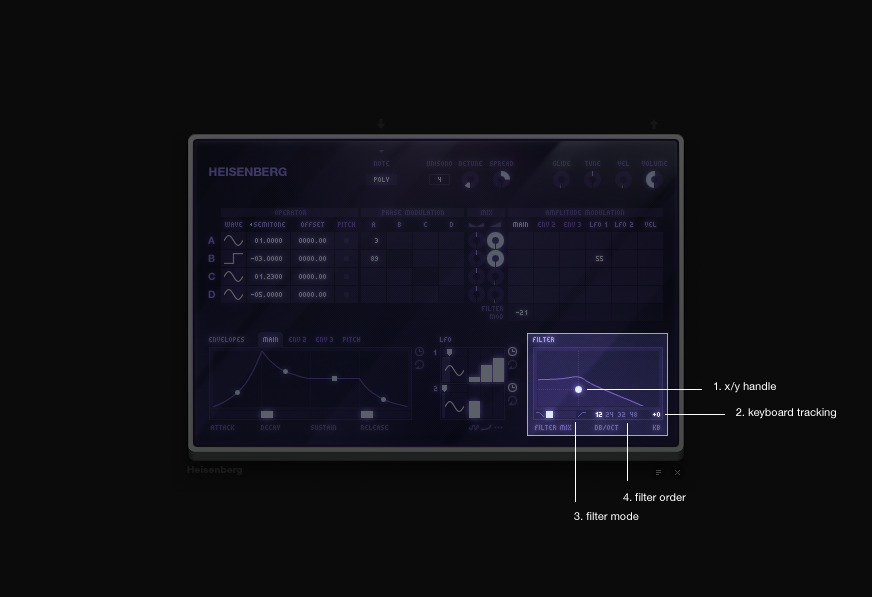 The master controls are where you can adjust the Heisenberg's global controls for glide, tuning, velocity and volume. The unisono functionality is also included in the master controls. If Unisono is activated it will affect all of the waveforms being produced by the