The phaser effect pedal is a modulation effect that works by creating a series of peaks and troughs in the frequency spectrum. The position of the peaks and troughs are modulated so that they vary over time creating a sweeping effect. The Phaser effect pedal can be used to give natural sounds a synthesised feel, for example making a human voice sound like the voice of a robot. 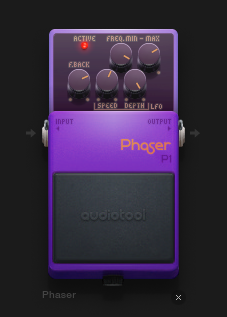