Okay so literally Dori made this like.....IN THE EVENING, when she came over to my house. We were so bored and she didn't have her phone, so I gave her my laptop and told her to go to audiotool, but she said she didn't want to talk to the people because if she did it would make her emotional and then I said, well come up with a tune.

So it took us 4 hours to come up with this masterpiece. Well I say it's a masterpeice, she says it Garbage, but it's really not that bad.

We were in my piano room when we came up with this, we were trying new chords, but I didn't want to make a complex chord, so I wanted to do something simple.

Naomi played with the E/G/B a lot, so I was like....huh. So I did E to the G, and I was like okaay...Then I did G to the B, and I was like heeeeey. This is lit, and I tried to find the next chords, but I couldn't because I suck at the piano, but Naomi didn't.

But we only had our chords, but I didn't know what we were going to do, so Naomi who showed all about LFOs and the fine tuning made this nice Trumpet.

And then we added some BEZZAZ! So, this is a collaboration between us, which is lit, cause I make shit and Naomi is great.

Also, we took apart Tocka's X O X O and we both learned something new. To give your beat that realistic sound we used the crusher and the stereo, it sounds real cool and although it messed up our bass, we worked around it.

We found a real cool preset which was actually made by our dear friend, Omega.

Yeah, anyways. I Don't care what you guys think about this! I think it's lit.

Btw, this was difficult for Naomi to make since it was a 3-Part Beat. So show some love!

But yeah we spent 4 hours on this while we could've went to get ice cream and go to our school dance-off. #MUSIC IS LIFE! 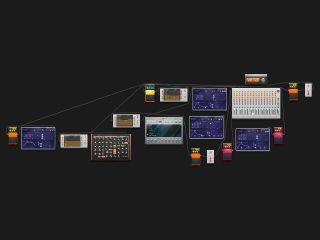