For my final assignment last quarter in synthesis class, I had a change to learn in-depth about granular synthesis and ring modulation.

An interesting thing resulted from my experiments. That was to generate water dropping on hard surface sounds. I'm recreating this through audiotool.

This signal is then being low-passed by a slope. The cutoff of this lowpass will determine the bandwidth of each droplets of water. So the higher the cutoff, the more noise it'd sound. Very low cutoff would sound more like birdchirps, although that requires different firing patterns of the droplets.

Both the Heisenberg and the noise is being fired by the Matrix device. I've inputted some notes and set the mode to "Random", although later in this piece, I switch to Zigzag/ Updown/etc.

One missing piece to being closer to natural sounding water is that the note should fire at less regular intervals. This is not possible, though I hope Audiotool will have the option to generate random note starting time.

Also, to better control this faux reverb effect, the release time of the Heisenberg would determine the "tail of the reverb" effect for the water droplets and manipulate the sense of how big the space is.

Just a rough draft for tonight. 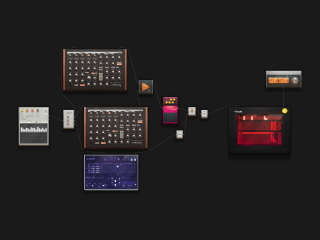