Maritime was the first song I ever published and it's still the most listened-to song I've created on this website; so here's a new, improved version.

When I first made the song, I knew nothing about any of the tools on audiotool and just played around with everything until it sounded okay. With this, I've cleaned up some of the sounds, as well as changed the melody in places because when I made this song I knew some music theory but I didn't know if you were 'allowed' to have the melody divert from the notes of the current chord.

I originally had the idea to fix this song up a while ago, probably 2 years ago at this point, when I first heard Russian Red's "Cigarettes Revisted" it was an update of a popular song of her's from her previous album (I think). I wasn't really prepared to update this song at that point, and then I left this site for several months. Since I've been gone for a while, I never ended up updating this song, but I suddenly felt compelled to do so. 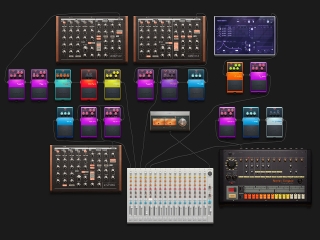