*not a full track- still editting

1.01 added drop oppertunity for some filth

i aalso realized that i don't like working in drafts alot, i wind up forgetting about the work, go fig.

1.03 Used some of the place holders i had in mind for some filthy wobs, still wanna tweak and add more. Overall strusture is close what i want but still a W.I.P.

1.04 W.I.P. still, played around with the centroid. tweaked the beat sequence, added an FX. still can't think of another bass, tones, sounds, etc. to fill the blank parts in the filth area, which i gotta figure out a better way to clean (lol, clean filth...oxymoron... awesome). I'm also starting to tax on my pc a lil' bit, oh well. I want a track that's Urban-Dubstep fused. Also, I may want fillers in the main parts so it isn't too dry.

1.05 W.I.P. Found some vocal fillers, kinda tells what to do. Liking it so far. but still more to do.

1.06 I found my filth, i just need to make it a lil' bit cleaner and work the centroid some more. I have been thinking that instead of pulsebass, i maay SEE if another can work, but I don't know until i try more. I also started to add some tags to the track since this is somewhat presentable now.

1.065 mini tweaks; forgot to turn my YAs and SWAGGER vocal on and boost the vocals audio to transition to the bass better.

1.07 I never did get the chance to publish the light background filler becasue I had to drop anything non-finals related to, well... work on my finals. I finally got to come back and make some more tracks for now. 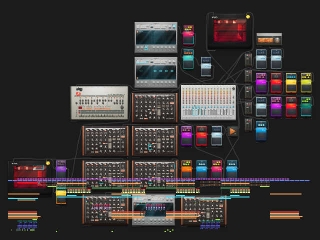