So these are the easiest effect pedals to master but there are many out there who never touch either of these.

At 0.08 i bring in the delay effect pedal. Essential what a delay does is it takes the incoming signal and repeats it a few times.

The 2 delay time knobs control the speed at which the original sound is repeated. Eg - 1/16 at 3 steps. Meaning every 3 steps it will repeat the signal at a rate of 1/16ths.

At 0.20 i mute the delay and demonstrate the reverb. The reverb works in much the same way albeit a bit more complex. Like the delay a reverb repeats the original signal over and over, but instead of 1/16ths it repeats it a couple of hundred times in very quick succession, creating this kinda "echo-y hall" effect.

The feedback knob controls how fast the repetitions will be, changing the overall tone of the reverb.

Damping, like the name suggests, dampens the sound. So instead of it sounding like its echoing in a hall it could sound like an almost underwater style echo.

Level controls how much of the sound is "drowned" in the reverb. Meaning 2% is very subtle and 100% completely drowns it. 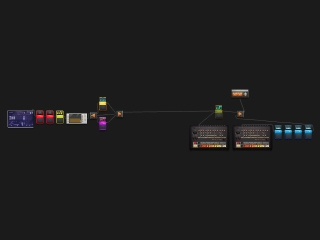