Open your minds and let them teach you...

V.1.0 drop concept thought up but want to flesh out more.

V. 1.01 made some droid and laser FXs, made an opener, but still wanting to flesh that out more, added some lasers to the alien section...more to come.

V. 1.02 thinking of how many measure needed for a warm up/build up, a high point past the drop, anonther warm up/build up, cool down, and realizing the the opener can also be a closer, that gave me saved time. i pretty much have a frame to work from, so given some time, I should have a full track.

V. 1.03 haha, talk about a freakshow wobble, this Heisenburg synth is pretty new to me but I think I made it work as an opener/closer piece. I may just use it in a small sense until I learn more about it, but wow did the update make it worth waiting through. Also, the length of the song is probably what I want for now. Now to stop beating around the bush and flesh out "verses" and such.

V. 1.04 made it moe deep space like, added a scenario w some library found vocals. I don't know if I will keep it like this overall, but it will do nicely for now. Also, playing the track in its pieces is becoming tough on my desktop, which sucks, but I'm happy to play with the new synth. The new stuff, it's very functional, no doubt about.

1.04r2 came back to audiotool, if only for a small while, listened to the track and heard some mistakes in some of my ending wobs. they did not match, and I found that my levels were off a big bit. sorry for a few weeks of bad wobs. :(

After leaving this song for quite a while, i chose to come back to the track with fresh ears, haven't heard this track in a good while. I come back and realized, "...OH MY GAWD!!! the levels!!!" I wanted a little bit of loud, but the first clap almost wrecked my eardrums, so the levels should seem more 'listenable'. 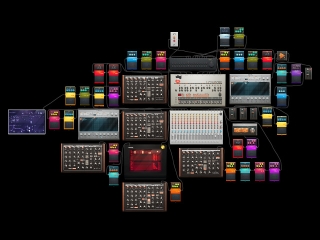