Okay i made this song Because i was Listening to AT and one of Andre's songs came on. i was working on some Tediouse things on the computer

and not really paying attention to the music.

What happend was; the song that came on was a repatative song with not many changes and i found a very nice place between being able to concentrate on my long tediouse task of the compter and being able to listen to music at the same time . This is a great new experience for me because the music i normally listen to Has lots of different parts to it and many changes. Normally when i listen to music while doing tediouse things on the computer, i have to stop what i am doing so i can listen to the song or Block it out because it makes me think to much and i dont get anything done. I didnt used to like repatative muisic that much but now i have found a real nice home for it in my ears while i do other things. Great multi tasking music because you dont have to think to listen to it

I wrote this As a trubute to andre because this song is inspired by him .

The title Addictive was chosen because when i was writing this I could not stop listening to parts of it. as a matter of fact i have it playing right now as i am Writing this :) i hope you find this as addictive as i do . Its very very simple and some what repetative. But i added a few nice changes to keep ya listening.

I think this is somewhere between Techno, House, or minimal. Not really sure what to call it.

There are no pre made loops in this track, the only sample i used are one shots for the machinist :) 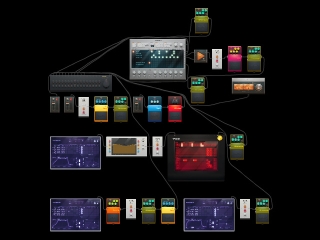