This track is inspired by

This is a new genera for me

I think its Acid Techno

This is me Experimenting and attempting to learn the 303

I grabbed a dum loop from the library because Drums are NOT my weak point and i felt Justified in doing this to save crative energy for the hard parts .. Plus the Kick Tom Clap sample i used is awsome i think no point in fixing something that woks until i put it on an album witch at that point i will replace the loop with an original work , However i did Write the original Hi hat line and the Spit hats, the spit hats are in the templates under Your next or something if you want to modify , use or see how it was done , i made a sample of it to save space on my CPU

everything else in this track, notes, bass, and 303 is my original work too no loops there.

This is a palat clanser for In anticipation for my horror Dub step project that i will be releasing on friday " Dirty Dan PT 2 ( Party Daze ) witch will be featuring Voice acting from DJSimplex myself and Oedipax . Look for it friday !!

Thanks for listening guys and as always LONG LIVE AUDIO TOOL 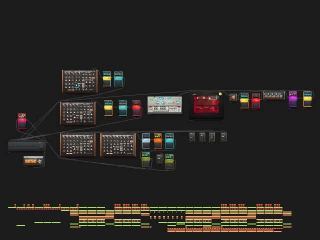