Ok. This song is dedicated to my boyfriend, Michael Sreenan. Why? Because my life sucks and he makes it better, point-blank. I've been trying to make him a song ever since we started going out (almost 2 months ago, holy shit, time goes by fast!!) and I haven't been able to finish one because, like I said, my life sucks, and thats includes my music-making abilities, lol. Anyways, today, after all the drama in my house (and outside my house, cuz there was a lot of running away) last night, I was just like "Fuck it." I'm chill with my suckish life. Everything's cool. It's all just like whatever. I seriously thought my time to "go to my creator" was last night, all peaceful and calm and cold like the way I was, but I woke up this morning, kinda pissed that I was awake and not in heaven (or hell, which is where I'm most likely gonna end up), but whatever. It's cool. God obviously doesn't want me (yet). But, anyways, Michael was there for me last night, and every second of my suckish life during the short time we've known eachother. But what's the rush, right? We've got forever. <3 I refuse to believe that he'll be another Derek (your Bacon Strips), leaving me in the dust like that. What I had with Derek Houser was nothing but a bunch of lies, but this relationship, and attatchment I have with Michael is really something special.

Regardless, I hope my music doesn't make wanna puke too much. Iknow it sucks, but WHATEVER. I'm learning (slowly). Suggestions, comments, advice, support, etc.? <3

Btw, happy early birthday Michael :* <3 Ilove you(: Oh, and can this be kinda like a part of my early-2mo-anniversary gift to you, too? <3 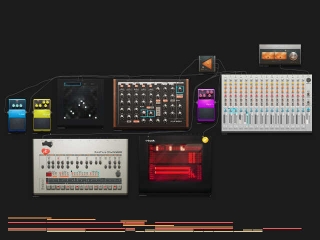