Stop it! I know your still thing about it! Why are you still thinking about them!? Because I drew a giant red arrow pointing at one!? Typical pervert excuse! You make me sick!!

The giant piece of crap your listening to is my best attempt at remixing "Stop Thinking About Butts" by Whitehorse. It is also going to be one of two contributions I'll be making to the upcoming Pinkamena Party Valentines Day Album. Oh yeah, I'm with Pinkamena Party, all three of me (well actually two of me; I doubt Blue Noise will be making an appearence there)... and if you don't know who they are you should look them up on Bandcamp and buy some of their previous compilation album; if you like my stuff and don't mind ponies, then you should love their albums.

Big thanks to Zovi (Super Saw Hoover) who was nice enough to give the vocal stem!

In other news, I have moved all Lois Cook and Blue Noise activities to their own respective accounts on Audiotool. I still have some tracks from those alias's in this accounts drafts so there are still going to be a few LC and BL tracks over the next few months but that'll be the last of it here.

"Stop Thinking About Butts" by Whitehorse,

"Kill Everybody" by Skrillex 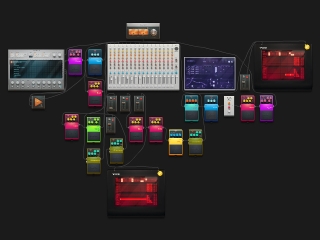