This song has been a long time coming. I think I may have started it almost a year ago. I tend to be very methodical, I have a hard time seeing beyond a problem I have not yet solved... which turned out to be a real issue when I hit a brick wall in the creative process.

This started out much different... it was a drums experiment, trying to mimic a Benny Greb rock beat I have never been able to master on a live set. When that failed to grow into a more cohesive idea... I left it .. and went down a different path, which led to 10 or 12 other roadblocks over the last few months.

It took being ill and out of work for more than a week... and seeing Fauko conquer his own discouraging creative barriers to motivate me to dig deep and make something out of this nothingness.. The result is Plagued... a fitting title I felt, for something that has pained me for so long.

It was a mess when I started it ... its still a mess, but I just have let it go and move beyond. Thanks Fauko for all the times you looked at this with me and tried to help ... 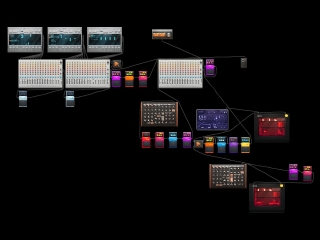