-Gravi's Thought's: If you've been following me for a while, then you should know that I mean business when I make Dubstep. I know I've said I'd stop a million times before, but come on, people. Who wouldn't want another "PRIME" track? Hope You Enjoy ^-^

-Interesting Fact: This is my longest running series of tracks.

It was a close race, but I chose the folling for having the moost varied, creative, and original remixes.

*1st Place- @no vyce (Kryptic) For the most wild Dubstep remix! There was alot of professional sounding instruments used in his track and it kinda made it an easy choice for first place. "Bragging Rights, 1 Follow, Several Tracks Favourited, AT/SoundCloud Promotion, Remix Featured as Bonus Track on the Album."

*2nd Place- @Alckhem For a very creative and chilled trap remix. You recieved some bonus points for incorporating your own vocals, but it didn't quite match up to win first place. "Bragging Rights, 1 Follow, Several Tracks Favourited, AT Promotion"

*3rd Place- @synthonix For having the most varied remix interms of genres. DnB is by far my favour ite style and you did great for a newcomer to Audiotool. "Bragging Rights, AT Promotion"

I will post honorable mentions on the rest of the tracks that I deem worthy. Thanks to all who participated! ^-^

All of Our Positive Energy Has Evolved...We Will Find "PEACE" 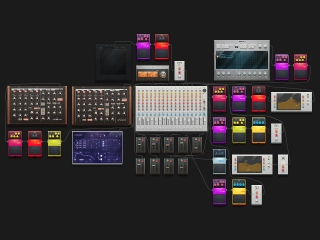