Finally the time came, I thought it would take longer, and coincidence is a synthwave.

well, as i said a while ago on my wall, to celebrate the arrival of the 100 followers, i would show my face (even if only half), well, here it is, as promised.

Here is a song with a theme that was inspired by a remix of the "Stranger Things" theme song that I heard some time ago. In this song I used a technique that I learned recently in a random video that suddenly appeared to me, in short, it consists of using a DTune to give a little bit of imperceptible distortion, but that gives that spice that was lacking in previous projects. even so, i know there is still a long way to go to complete the holes that come out in these projects, but as the name says, they are projects lol.

So close to reach, and

So far away. with that which

suffer all that again

that's open taking everything. can it stop?

Drops of rain, peace to bring.

about that thing it can't beam.

Falls down, at the cave

when all that is over. Can you save

it in your soul. all the brigh'

at a glance,lost the night.

take a bit of care,

cause it's arising, a nightmare.

"All writing can be crossed out. but what has been said only remains to add!" 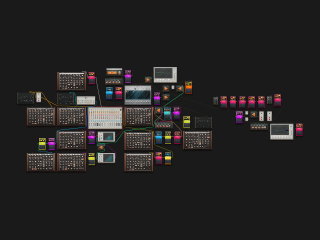