There are beings that exist in the world that are not made from the same fiber as you and I.

The are beings conjured from the fabric of time and space.

Other then the the manner in wich they are created , they are much like you and I exept for two other Qulities they posses

the second is that they don't die

No one knows when the originals came about they just are .

It started with the original six

The six gather once every 12 th year of the milenium when they have enough energy to make another of the frey.

each time they gather and create another

a new era for mankind begins. this is called the cycle of constant fate

they take the names of Exalted Titles like Pharo

Jesus, Buda , Zues, titan, or Sameri, no one knows exactly how many of them there are and mankind only as a hint of thier existance

They give him the form of a man and name him

you will notice that there are many many audio tracks in this ...

This is because i make sounds and bounce them into the track to save space on my CPU so i can keep creating.

This is a remix for /of perspectives Dub step comp . though i re designed much of the sounds

i used every aspect of the basic dub step loop provided. that said , this is more of a reimagining of that basic special thanks to

Infytusion . Cuz i broke into his house to see how to make one of the bass sounds

and perspective for inspiring the track with his dub loop 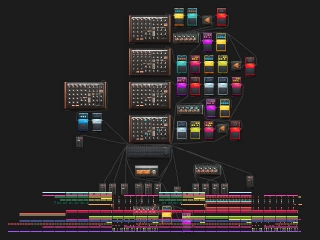