The Dark Half of The Shining Core Showed Us The Truth About The Divine Power. Just as There was a Dimension of Light, There is Also A Dimension of Darkness. It Prophesied an Event In Which Light and Shadow Successfully Combine...

Oh thank God. I thought this marathon would never end. I was getting pretty tired of DnB and this track really wore me out, but I still put a bunch of effort into this. Thnx to @Cosmic DaVinci for letting me remix his great track. :]

My Remix of "Stories" by Cosmic DaVinci, otherwise called "Prophecies". Although I procrastinated on this alot, I still think It turned out pretty good. I tried to incorporate a lot of different sounds into this song. This is definitly the largest track I've made on Audiotool

We Travel To The Dimension of Darkness in, "THE VOID" 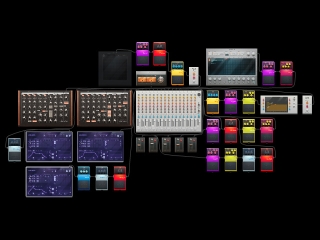