Originally I was going to make this into a chill, more experimental beat, but then I had the idea to make some big house type track, then when I couldn't find a chord progression that I liked, I decided that I'd just turn it into a complextro with bits and pieces of the original chords I managed to make.

I guess it goes without saying that I started with the chill intro, I ended up liking it a lot so I decided to keep it in. The idea of keeping it was to have it sort of act as a quiet way of opening up to the main stage. It sort of tells a story, maybe the calm before the storm.

The chords were next, I could just not for the life of me figure out a nice minor chord progression for the main parts of the track, which is when I decided to layer them and make them more explosive stabs as the track slowly turned into the complextro mess it is now.

From there it was just a matter of making the beat and the filler synths, carefully arranging them and sometimes going as far as throwing around notes in 1/128 just to get the stutter effect I wanted. The first section of the drop was heavily inspired to give the feeling of a high octane, racing type feel, while the second section was meant to sound like a desperate turn of events.

All in all though, I had a lot of fun making this, especially the part from 2:30 to 2:45 I feel was the most inspired and some of my better arrangement work; something I've never been particularly good at. 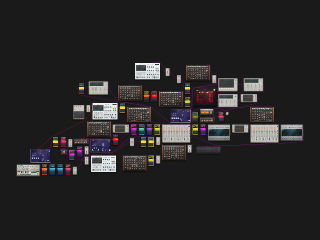