A long Time Ago, In collab Far Far away, There was a draft that Griffen E and I worked on the was never finished..

It was a sad But all too Common end to a collab that was Torn in two different ways before it ever got started. It was never to be worked on again

I salvaged some of the the Vocals FRom this Collaberation where Griffen had Uploaded a simple (A.E.I.O.U.) Vowel scale he sang as an idea place holder untill The Ill fated Lyrics were to arraive.. They never did.. No one Knows what Evil became of those Ill Fated Lyrics long ago. But i decided to take what was there .. Glitch them up a little bit and add a track behind it .. Because even though they were just Him singing the vowels. They sounded Gooder -n-hell. And i didnt want them To go the Mysteriouse way of the long lost Collab that never was .

I SEarched Deep withing myself and the old religions of Glitch, Dubstep , and Chill out , and made a very peculiar track To accompany the NEwly Ressurected vocals from The dead collab filese. Crossing the realms of the dead collaberations and into the light of the living tracks, Here is "step easy " Music By uprising Vocals By Griffen E"

I had fun with this. Lots and Lots of Experimentation going on here

I pretty much took Griffens Vocals , Glitched them up and added a Rass To Get mroe variety out of the pitch, Then placed them through out a very experimental track :).

This track is a Hybrid opf Dubstep , Glitch and Chill.

I coulda used the vocals of him the did not sound likd a chipmonk.. But i love the chipmonks and i liked the way he sounds as a chipmonk so he will forever be Immortalized in my track as Griffen E ... The Chipmonk.. hehe 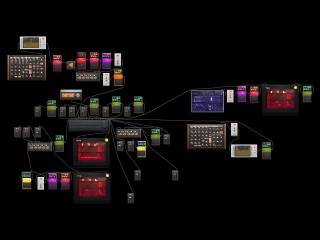