is there a genre called wtf? idk what i made but i like it

SO basically when i made this song i hopped on audiotool was scratching my head thinking "ok brain, what the hell am i gonna do for home office?" The first few days were a little bit of adding stuff like a pad and background arps, and then i just left it alone for a month because life got busy for me.

I come back to audiotool and, like i did in high school, i said "oh shit, the deadline's in 2 weeks, i gotta fucking do something." So i scratched my head even more thinking what on earth i was gonna do with this pad, arp, and reese bass that I made. You must think im bald for how many times ive scratched my head. But then, i got an idea. How about kawaii future bass? That's original, right? (no)

So i put together a nice chord progression, and actually while i was doing that, i was dickin around with the bpm and thought about switching up the beat. So made that other thing you hear in the second drop.

The weirdest part was gonna be how i mesh those two parts together? Kawaii future bass and whatever the fuck kind of jazzy shit i did. So i pulled a smarty and automated the bpm. Yeah, my forehead is still swollen from that big brain move.

All in all, though, this track was a blast to produce, and I hope you guys enjoy it as much as i did making it :D 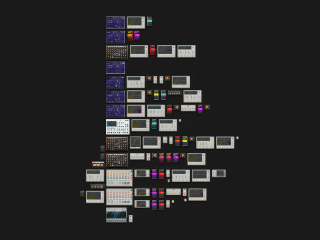