-Gravi's Thoughts: This is a modified AT remake of a song I had to make in Logic 9 for school. Here's the original song: "http://www.audiotool.com/track/free-onbv2Z8p/". I took some advice from @opaqity and tried making a song without a definitive genre. His latest tracks "http://www.audiotool.com/album/wgGYGCSe/" really helped inspire this, too. However to keep the feel of the original, I brought some samples over from Logic. Hope You Enjoy! ^-^

I never knew much about my Dad. He died about 10 years ago sometime after I turned 4 and before my younger brother, Aiden, was born. Mom always tells us that he was a great and powerful man and that Aiden and I take after him alot. But if that's the case, then we can blame Dad for alot shitty things that have happened in our lives. Like, how we were both born with blue eyes and white and black hair when everyone else on our world has green eyes and grey hair. Or how the powers that we were born with made it impossible for us to be seen as normal by anyone else. I never asked for the teleportation, the enhanced speed and stamina, or the ability to read minds. Not to mention that I HATE the color blue. I mean, I'm sure Aiden certainly never asked for his abilities either (even though his are a bit cooler than mine). But, I guess whoever said "Like Father, Like Son" (or in my case, Daughter) isn't completely full of shit. The point is that we never asked to be outcasts, freaks of nature, or "gifted children" as our mother would put it. What we were born with has kept us chained within our society's expectations. Eventually, you get tired of everyone staring at you, as if you were some sort of monster. Fearing you, not because of who you are, but for what you're capable of. We were trapped. That's why we decided to run away. We left thinking that we would finally be free of everything we hated. If I had only known what was going to be in store for us.

My name is Natasha Darcone. This is how our journey began. 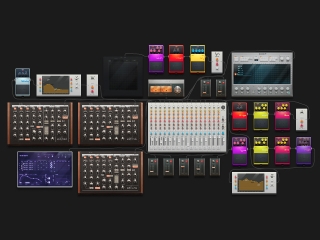