*STORY OF THE CORE*

The Shining Core was once a bright Star filled with powerful energy. An unknown event caused the Core to be struck down. The Core had literally fallen from the stars. On Impact, the Core was divided into two Entites. One was of Light, the other was of Shadows. From this, Two new Cores were produced. It is prophesied that when the Dark Shine Core and the Sky Shine Core Combine, A 'New' Core will be found, and a Pathway will re-open to the Stars...

Happy New Years Guys! I wanted to start off 2013 right with some traditional "Gravistep" as my first track. I really put my heart into this one, with a little inspiration from Blackmill and @______ . Hope You Guys Like It. =]

Ladies and Gentle-Audiotoolers, I give you "Star Shine", The TRUE Power of the Shining Core. This is also the 3rd and Final Installment in the "SHINE" series. Never before have I ever put so much raw emotion into one song, in my opinion that is. And for once, I think I actually EQ'd a song correctly. Also, If I had the proper equipment and/or recording software, I would've provided my vocals to this...oh well. Maybe next time. Hope You ENJOY! ;)

1. Plz Guys, No Remixes unless you ask me personally on my wall 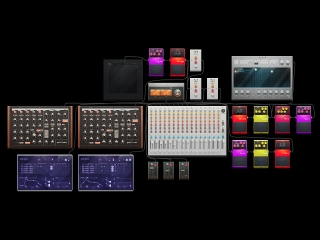